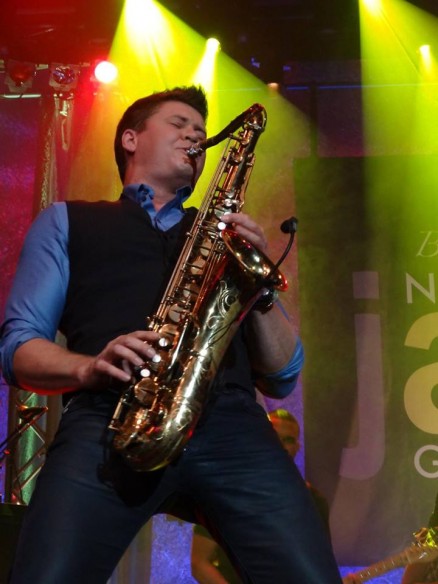 Germany’s greatest Soul, Funk & Jazz-Party
“The smoothest way to end an old and start a new year” – this is the theme for the SMOOTH JAZZ FESTIVAL AUGSBURG 2015: It’s the first time that the organizer smooth entertainment presents the stars of the international Smooth-Jazz-Scene around the turn of the year. As in the previous years, the three-days-festival is going to take place at the famous Park Theatre in Augsburg – the perfect surrounding for the big names performing on stage. The most extravagant of them is likely to be the guitarist and vocalist Nick Colionne who will also be hosting the “New Year’s Allstar Jam-Session”, starting on New Year’s Eve after midnight. There is hardly a great Smooth Jazz Festival or a Smooth Jazz Cruise in the US, Colionne has not joined and performed at, yet. The flamboyant personality, who has been elected “Performer of the Year” several times, is not only an excellent musician, but also a gifted showman.

With guitarist Peter White, keyboardist Jeff Lorber and saxophonist Everette Harp, the line-up comprises even more great names, which together look back on several Grammy nominations, number-one hits and about 50 solo albums. And the programme continues with saxophonists Michael Lington and Jackiem Joyner, bassist Michael Manson and singer Selina Albright – they also provide best smooth jazz sound and great entertainment. All of this awaits guests in the nonchalant, relaxed and boisterous atmosphere of the Park Theatre, for which the Festival has been known for years now. And of course, also this year the legendary after-show parties are part of the programme and finish off the three evenings enjoyably.

The festival’s partner location this year is again the “Dorint Hotel an der Kongresshalle”, which is connected via shuttle bus to the Park Theatre. The festival’s gala dinner, the “hangover breakfast” after New Year’s Eve and also the New Year’s Concert are going to take place at the Dorint Hotel.