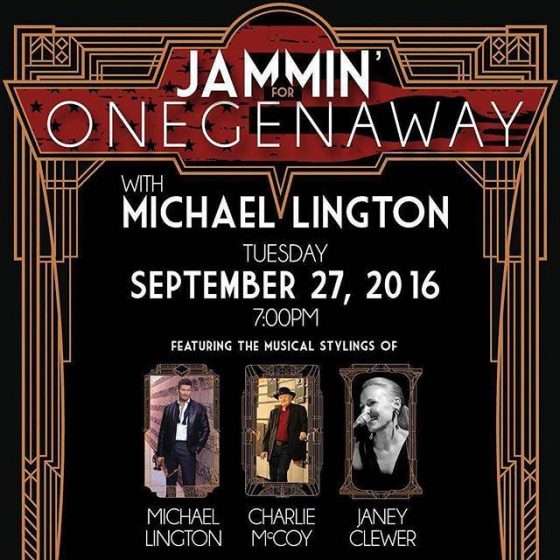 Join us for a special evening to celebrate the mission of One Generation Away, a local 501c-3 that provides emergency food assistance to Middle Tennessee residents in need while teaching its volunteers to love one another through service. Their goal remains to eliminate poverty in America in our lifetime.

The evening will begin with legendary Country Music Hall of Fame Member Charlie McCoy, known for his world-class harmonica playing with superstars including Roy Orbison, Elvis Presley, Johnny Cash, and Bob Dylan, to name a few. Charlie will later be joined by internationally known singer-songwriter Janey Clewer. Janey has worked with musical greats from Elton John and Julio Iglesias to Harry Connick, Jr and Gladys Knight and has been a featured songstress at Tokyo’s Cotton Club.
The evening will feature an all-star house band including Dave Innis and Greg Jennings of Restless Heart, as well as Bruce Gaitsch, Chris Rodriguez, and Boh Cooper. The evening will close with a fiery set from LA-based saxophonist Michael Lington, blazing a fresh, innovative road with a freewheeling immersion into the heart of the 60’s and 70’s Memphis Soul vibe. In his career, Lington has collaborated with many other top artists like; Michael Bolton, Barry Manilow, Aaron Neville, Taylor Dayne, and countless others. This is the second year for Charlie McCoy and Michael Lington, as well as Innis, Jennings, and Gaitsch to participate on behalf of OneGenAway.

There will be a prize drawing throughout the evening, emceed by Steve Hayslip of Newschannel 5, also returning for a second time to benefit OneGenAway. General Admission seating is $50 with premium seating available through OneGenAway. Email tickets4onegen@gmail.com for a listing of available premium tickets and VIP information. Doors open at 6:15 with show starting at 7:00pm.
There will be a VIP Cocktail Party from 5:30-6:30 for select premium ticket holders. The Erabellas will perform and guests are invited to mingle with the artists.